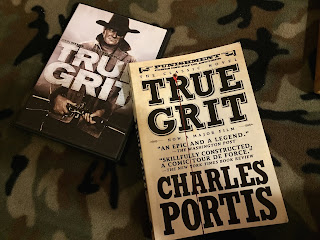 Charles Portis wrote a fascinating novel True Grit, that was subsequently made into two very good films.  We've shown our hand in this write up but know that you will still listen to get the details. The first film was a 1969 production starring John Wayne, Kim Darby, and Glenn Campbell. It was directed by Henry Hathawy is remains a classic example of the great American Western.  We think the 2010 version by the Coen brothers and starring Jeff Bridges, Hailee Steinfeld, and Matt Damon also deserves a place in that pantheon.  We are joined by our compatriot Mike Lembke, and hope that you will enjoy our spoilers and digressions.

Posted by Spine and Sprocket at 6:59 PM