Episode 30: Bridge On the River Kwai (Book and Film) 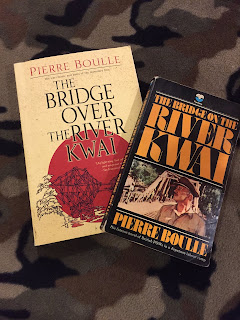 We must apologize for the muffled sound quality in the first 22:00 minutes of the episode.  It does clear right up after that.  In this episode we take a look at the Pierre Boulle novel Bridge Over the River Kwai and the similarly named film Bridge On the River Kwai. Roger Ebert gave the film 4 stars and said "...Although the film's two most important characters are both mad, the hero more than the villain, we're not quite certain what is intended by that final dialogue. Part of the puzzle is caused by the film's shifting points of view."  Jeff loves that final line.

This is absolutely a classic WWII film that is more about personal relationships than the war.  The book is also a classic of course and is a quick read that offers a slightly different perspective on the story than the film.  Mike Lembke joins us for a review of both.

Posted by Spine and Sprocket at 3:33 PM