The second Conan movie, Conan the Destroyer is our topic this evening.  We compare and contrast it to the original Robert E Howard stories, as well as the first DeLaurentiis / Schwarzenneger film.  Roger Ebert said "The first Conan movie, "Conan the Barbarian", was a dark and gloomy fantasy about the shadows of prehistory. This second film is sillier, funnier, and more entertaining. It doesn't take place before the dawn of time, but instead in that shadowy period of movie history occupied by queens and monsters, swords and castles, warriors and fools"  He shows a good understanding of the differences,  although we think he was a bit kinder to the film than we are. Join Dave, Jeff and Mike as we slice into Conan the Destroyer. Lot's of laughs and barbaric appreciation.

We will do the Tower of the Elephant next time.  We pushed it back a show.

Episode 27: Conan: The Scarlet Citadel and Queen of the Black Coast 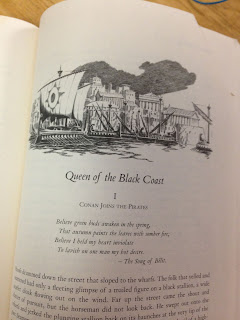 As promised many shows ago we return to the Robert E. Howard's Conan Tales. We slice into The Scarlet Citadel, a tale of high adventure, (oh, that's a cliche). It's the story of Conan's capture on the battlefield, imprisonment in a Citadel (Scarlet of course) his subsequent escape and return to his kingdom. Yes, there is a whole lot packed into this short story. The second story Queen of the Black Coast follows Conan on his pirating and jungle adventures with the fascinating pirate Queen Belit. Sit back and join Dave, Jeff and Mike as we discuss said stories. Readings by Aaron and David Kleinschmidt
Music provided with kind permission from Erdenstern.