Episode 17: The War of the Worlds in Film

When we were young, George Pal created a film called The War of the Worlds, and it captured the 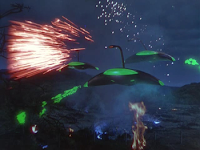 We ask the following questions, Does Spielberg's version surpass or meet the power of the 1953 film and do either of them match the creative genius of the novel? Come join Dave, Jeff, and our guests Mike and Dennis as we have a lot of fun reviewing these two Sci-Fi classics.