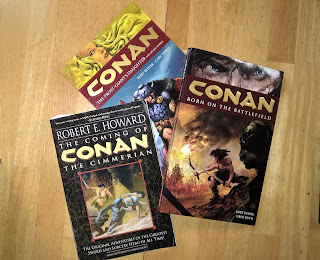 Whether you pronounce it Conan (like in co-author) or Conan (like in con-man) the fact that Robert E. Howard's most famous literary creation has become an enduring icon in culture -- both through the original writings and the many spinoff comic books and movies -- is indisputable. Tonight we start where it all began; we read and discuss the first three Conan stories in the order in which Howard wrote them.
Join us and our two guests, Mike and Dennis, as we dissect the barbarian's early adventures and start to unravel the mystery of his appeal. 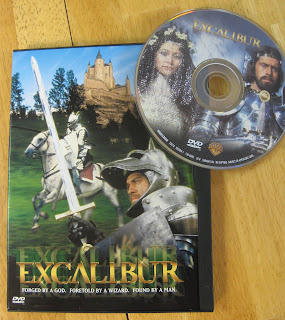 For this episode we have decided to take a noble gander at John Boorman's 1981 film Excalibur. It is a visually stunning film shot entirely in Ireland and is credited with gallantly launching the careers of Liam Neeson and others.  This is one of Dave and Jeff's favorite films from their young adulthoods.  Mike was not quite as impressed.

The film tells the story of the rise  of King Arthur and his court, and ends with (spoiler alert) Arthur's death and the return of Excalibur to the Lady of the Lake.

Roger Ebert said "As a panorama of sword and sorcery, however, it is very beautiful to watch. And as a showcase for Nicol Williamson's Merlin, it is sometimes a lot of fun; Williamson plays the magician as a medieval Noel Coward, always armed with the wry witticism. His relationship with Morgana (the lovely Helen Mirren) is actually the most interesting thing in the film."

So come, join us and our special guest Megan as we discuss, digress and wonder what's up with that?