We believe the book we are discussing tonight The Fall of Berlin 1945 has been re-issued as Berlin: The Downfall 1945.  Or maybe that is the European title of this well researched work of non-fiction.  Either way it will equip you to be able to give an historical rebuttal to your friends who insist that Adolf escaped to South America and lived out the remainder of his days in peace and margaritas. You will need a strong stomach to read this horribly fascinating book by Antony Beevor, that recounts the astonishing terror that accompanied the end of the Third Reich. The following quote from Beevor's webpage sums it up nicely....or should we say tragically? 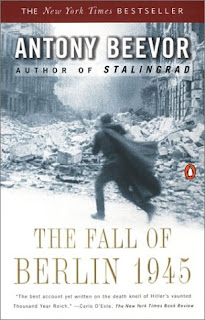 "The Red Army had much to avenge when it finally reached the frontiers of the Reich in January 1945. Political instructors rammed home the message of Wehrmacht and SS brutality. The result was the most terrifying example of fire and sword ever known, with mass rape, tanks crushing refugee columns under their tracks, pillage and destruction. Hundreds of thousands of women and children froze to death or were massacred because Nazi Party chiefs, refusing to face the reality of defeat, had forbidden the evacuation of civilians until it was too late. Over seven million fled westwards from the terror of the Red Army."

After this sad historical study we will present something much lighter for you, our listeners, a book review of The Sword of Shannara and the John Boorman film Excalibur.

The music for this show has been provided by Purple Planet.